Game Technology offers great opportunities for addressing societal problems in a fun way. I think they are also great for mentorship, general education and change management.

The wikipedia defines a mobile game as a video game played on a feature phone, smartphone, PDA, tablet computer, portable media player or calculator. The first game on a mobile phone was a Tetris game on the Hagenuk MT-2000 device from 1994. Three years later Nokia launched the very successful Snake on selected models in 1997. Snake and its variants has since become one of the most-played video games and is found on more than 350 million devices worldwide.

According to the Half the Sky Movement website with low-cost handsets and increasing penetration of mobile phone networks globally, millions of people who don’t have regular access to computers or fixed-line telephones now use mobile devices as daily tools for communication and data transfer. Today, there are 3.5 billion mobile phone users in the world; more than 65 percent of them are in developing countries. Under the leadership of Games for Change and supported by USAID, three mobile games are being created that are aimed at communities in India and East Africa. To obtain a free copy of the games email hts[at]gamesforchange.org.

How can we use mobile games to mentor and support girls and women in technology?

Your comments and insight are welcome. 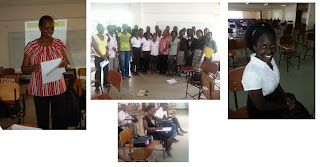 On the 27th May 2013 thirty participants converged to attend the seminar on how to write a winning curriculum vitae. The seminar was organized by AfChix Uganda and the Makerere University College of Computing and Informatics Technology. It targeted the final year computer / information science female students.

I found this interesting posted by Linda Coles


Please click this link
Posted by Nodumo at 12:06 AM No comments: