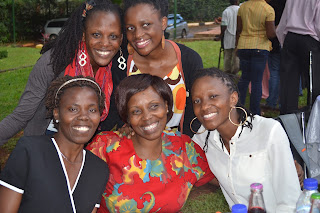 Passion for Mentoring Girls
Ms. Nodumo discovered she was passionate about young girls while working at Africa University in Mutare Zimbabwe from 1999 to Dec 2008. She found herself drawn to support girls in the IT Department as well as support girls in her role as part-time Assistant Warden responsible for female hostels.

In Uganda, Ms. Nodumo believes AfChix Uganda has done some good work - visiting schools to talk to girls about careers in Information Communication and Technology (ICT), celebrating girls in ICT days, identified girls to mentor and held their hands, held meetings to strategize in developing proposals for funding and met to draft conference papers for international IT related conferences. As the girls did all this, they had immense fun, became a family and learned from each other.

What kind of AfChixUg do you see in the next 5years?

Here are some testimonies from the girls.

Lillian Achom: Lillian's interaction with Ms. Nodumo dates back in 2006. In about six months’ time, she will be celebrating ten (10) amazing years of quality friendship with her. Over the past years, she has found Ms. Nodumo to be a dynamic woman who by heart, has a unique insight and tremendous ability to connect with people, inspiring and nurturing them to move in a positive direction; Ms. Nodumo is devoted to taking the time to understand your goals, dreams and aspirations, is dedicated to your success and finding new ways to support you. One of the very important moments in Lillian's  life was her education. She would not have got scholarship to upgrade her studies had it not been for Ms.Nodumo's devotion.